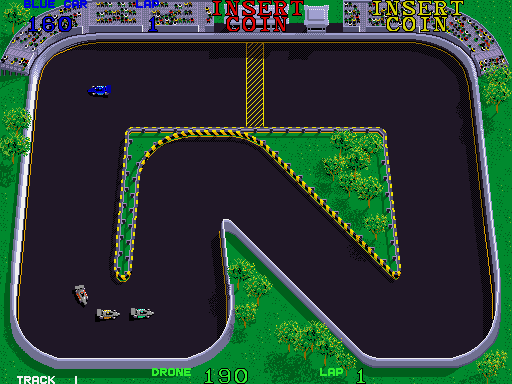 Walk into any arcade in the late 70s and early 80s, and you were sure to find one of the Sprint racing games. Even though the graphics were simple, the action was intense and drifting around the tracks alone or with a friend was always a blast. When Super Sprint appeared in 1986, players were blown away by the gorgeous color graphics and deeper gameplay, with eight different track designs, upgradeable cars and even a rescue helicopter! As you race around each track, you need to dodge the oil slicks and pick up wrenches that are scattered around the track. After each race, wrenches can be exchanged for upgrades like better cornering and faster top-speed. Super Sprint is for 1-3 players.

Super Sprint is a racing game for one or two players, with the Arcade version allowing three players to race at the same time. Gameplay is from an overhead view of the racetrack. The racetracks start simple and gradually get more complicated, and may also feature obstacles ranging from traffic cones to tornadoes. Occasionally wrenches will appear in the roadway, and when collected they can be used after a race to power up your car with better tires, better acceleration or a higher top speed.

I think 6 adds a credit for player 2. Not sure why these games don't come with instructions.
Reviewer: icarusac - - November 6, 2015
Subject: Controls
What are to controls I need to use to play the game?